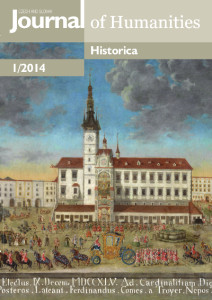 Robert Antonín
From Warrior to Knight: The Paths of Chivalric Culture in Central European Space Using the Example of the Bohemian Lands

Abstract
The article focuses on the spread of chivalric culture, a specific phenomenon part of the processes of social transformation in the Czech lands between the eleventh and thirteenth centuries. The article attempts to challenge existing research assumptions in the Czech lands, within which the research on knighthood is methodologically subordinate a priori to accepting the explanatory model of the so-called “Central European type of state”, a concept which confines the process of knowledge creation with respect to knighthood into a narrow paradigmatic constriction and thus limits alternative perspectives that are inconsistent with this explanatory model. In this context the author shows that unlike the Western European research situation in this field, research in the Central-Eastern European area has focused on very few pieces of documentation illuminating a shift within the economic structures and implicitly capturing the shifts of state organization (the form of the names of types of offices, etc.). This methodological approach is grounded in the tradition of positivistic historiography (with its emphasis on finding facticity) and Marxist historiography (with its emphasis on the role of material structures in the development of society) and identifies reality, as a whole, with a physically processed experience, an approach which to a significant degree does not allow it to conceptualize medieval transformations on the level of mental structures. On the contrary, this author considers the world of mental structures as an integral component of reality in addition to the physical ones. From this perspective, the core of the paper considers the process of the genesis of chivalric culture in the Czech lands as an expression of the realized cultural transfers proving the transformation of the ideas and self-identity of the nobility which lead to the justification of the feudal system (respecting local possibilities and traditions). Contrary to the existing research which places the spread of chivalric culture in the Czech lands in the second half of the thirteenth century, this article presents evidence suggesting the phenomenon took place at the beginning of the twelfth century and suggests the artificiality of borders between the Western European and Central-Eastern European areas in the Middle Ages.

Roman Zaoral
Pilgrims and their Money on their Travels to Rome: Reflections on the edition Il Libro del pellegrino (Siena, 1382 – 1446)

Abstract
The pilgrimage book (Il Libro del pellegrino) of the hospital of Our Lady della Scala in Siena dating back to 1382-1446 represents an accurately led document on monetary deposits in one of the most important church institutions in Siena. The large-scale collection of currencies registered in this book is an interesting witness to the movement of money in circulation in late medieval Europe. The book, however, does not register all pilgrims who visited Siena on the way to Rome, but only those who deposited their cash in the hospital with intention to withdraw it on the way back.
The author’s aim is to compare the registered deposits of pilgrims coming from the Lands of the Bohemian Crown with the amounts intended for the pilgrimage to Rome, which have been entered into the Memorial Books of the town of Olomouc in 1430-1492. These sums range from 4-5 Prague marks for the lower middle class to 8-10 Prague marks for the higher middle class. The author distinguishes between money intended for funding the journey back (1.5-8 Prague marks) and petty cash (within a range of 4-35 Prague groschen) which only sufficed for a few days.
Contrary to testimonies, deposits were not a reliable indicator of the social status of their bearers. Pilgrims bearing gold coins is attested to in more than 70 per cent of all the registered deposits. Larger amounts were mostly deposited by those pilgrims who came from far-away regions or by older priests who took all their belongings with them in anticipation that they would not be coming back. This was the case with Florian of Kočov, chaplain in Volyně (South Bohemia) who deposited 20 florins in the hospital of Siena.
Entries in the pilgrimage book of Siena mention Florentine florins, Venetian ducats and Hungarian florins among the most popular gold coins; Prague groschen and Flemish groats prevailed among silver coins. These data, however, do not make possible an estimation of how much money found its way into the hospital. The sum total of 2500 florins, which represents a value of 328 deposits registered by 1410, surely did not reach the hospital treasury as a whole, because many deposits had been withdrawn in the meantime. A relatively large amount did, however, continuously pass into the ownership of the hospital.

Abstract
The sixteenth century was a time of great change in religiosity. Churches were being built with new rules and new traditions were being born. At the source of those significant changes stood men whose goal it was to uncover the true teaching of God. Their theories were realized in systems of faith and rules of behaviour that influenced the everyday life of common people who did not necessarily understand contemporary academic quarrels. A great number of controversial pieces were written and published at the time. This paper will discuss the men who formulated and expressed their ideas publicly in polemical books. What was their educational and social background? What were the differences between particular confessional groups? I will focus on the situation in the Polish-Lithuanian Commonwealth which, thanks to its tolerance and openness, became a shelter for religious refugees of the time. This tolerance together with a rich tradition of public oratory created the background for religious controversies and disputes to take place privately at the dinner table or publicly in print.

Abstract
This study examines Early Modern English travellers and their point of view on the religious and cultural matters in the Bohemian lands and asksif and how their opinion changed during the sixteenth, seventeenth and eighteenth centuries. An analysis of several travel diaries examines the degree to which Englishmen, as members of the Protestant Church, were confronted with a complicated confessional development before and after the year 1620 during their journies in the Bohemian lands. This article also discusses how English travellers perceived Bohemian and Moravian inhabitants, their character, customs and the Bohemian lands in general.

Abstract
“Whether It Is the Child`s Soul What Matters Here?” Emergency Baptisms and the Role of Midwives in Czech-Speaking Sources of the Early Modern Period.
One of the most important roles played by midwives in Early Modern society was the performance of emergency baptisms. During the times of confessionalism the topic of the emergency baptism became a field of contest. The complicated theological quarrels this topic generated effected every single person. The goal of this paper is to contribute—on the basis of printed sources from the sixteenth and seventeenth centuries that circulated in the Bohemian Lands—to the research of the confessionalisation and also to show the impact of the complicated theological quarrels on daily life in early modern society, an impact felt at the very beginning of one´s life.

Abstract
The article is dedicated to the way in which the Minorite monastery in Krnov solidified its position within the framework of the municipal community of Krnov as well as in relation to the Krnov prince and the Olomouc bishop at the time after the Thirty Years’ War in the second half of the seventeenth century. It focuses on the arguments used by the monastery superiors at the time in negotiations concerning selected phenomena of Baroque Catholic spirituality. It attempts to demonstrate how, if at all, these arguments could have had an influence on the solidification of the position of the monastery.

Abstract
The Municipal Armed Forces (the MAF) belonged among the traditional municipal institutions in the Early Modern City since the Late Middle Ages. The MAF helped the citizens to stand up to their surroundings (e.g. nobility, the state or non-citizens), and it helped them to create their self-image. After the second half of the eighteenth century some of the crown cities of the Bohemian Lands (Prague, Brno and Olomouc) re-actualized the importance of the MAF. The reasons for this phenomenon are different in every city, however, some similarities can be seen across the cases: social distinction and hierarchization, loyalty, city patriotism, and land patriotism. Ceremonies of the municipal guard (e.g. marches, parades, consecration of the banner, visits of monarchs or other prominent people) were all formative processes during which the identity of the townsmen was forged. The local collective historical memory or, more precisely, the gloriuous history of the city, played an essential role in this process. Speakers and leaflets glorified the heroic and virtuous deeds of the townsmen’s predecessors providing an example the townsmen were expected to follow.. In atime of on-going modernization of the army the MAF was not a mere relic of old arrangements. It reflected the values and importance of townsmen society.

Jitka Jonová
“The Kohn Affair”: Negotiations Between the Holy See and Vienna Regarding the Resignation of Archbishop Theodor Kohn

Abstract
The Emperor in the Hapsburg monarchy had the right to name new bishops (while the Pope only confirmed the candidates). It was a different case, however, in the Olomouc archdiocese where the chapter held the privilege of free elections of the bishop. This was also the case with the election of Archbishop Theodor Kohn (1845–1915) in 1892. Although his election was met with great, his status gradually worsened within the archdio- cese to such an extent that demonstrations were actually held against him. The situation reached such a serious state of affairs that the Viennese government and the Holy See were forced to seek out a possible solution. It gradually became apparent that the further con- tinuation of Archbishop Kohn in the office of the Archbishop of Olomouc was no longer maintainable. A cardinal commission consequently called for his resignation (1904). This solution was positively met in Vienna which had supported this step even earlier but had respected the canonical procedure from the side of the Holy See. Kohn viewed his resigna- tion as unjust and worked at rehabilitating himself, unsuccessfully, however, in the end.

Pavel Marek
Gorazd vs. Žídek. On the Clash of Two Views within the Orthodox Church in the Czech Countries in the First Half of the Twentieth Century

Abstract
The aim of this contribution is to probe the history of the Orthodox Church in the Bohemian Lands during the constitutional era, in the 1920s and 1930s. We recall a conflict of two Orthodox groups which, through their leaders—Matěj Pavlík-Gorazd and Josef Žídek—took opposing views on the nature of Orthodoxy in the Bohemian Lands. Žídek advocated a reception of the traditional, Eastern Orthodoxy, meanwhile the bishop Gorazd was a creator of its national, Czech version.

Aleš Vrbata
The Primacy of the Past in Salazar

Abstract
Whereas there is a general agreement that Salazar was a conservative politician, the Estado Novo regime is frequently labeled as “Fascist”. Referring to Nazi-fascist mythologies, this paper defends Salazarist legitimatory discourse as having a fundamentally conservative and counter-revolutionary nature. Even though the Salazarist anti-modern and counter-revolutionary philosophical background overlapped with fascist/nazi/authoritarian regressive political imagery, it was deeply rooted in traditionalist nationalism. Nazi-fascist societies were—at least partly—produced by a “modernist revolution”/”temporary revolution”, i.e. a palingenetic myth of “creative destruction” (Roger Griffin). In Portugal it was rather traditionalism and its preeminent mouthpieces (Maistre, Bonald, Donoso Cortés) that were echoed in Salazarist discourse. This is why Salazar`s basic theses remind one more of Maistre, Burke, Maurras or papal encyclicals than Mussolini or Hitler. Whereas in other parts of Europe traditionalism did not manage to take control of national policy and was exploited in favour of Nazi-fascist “(supra)temporal revolutions/purges”, Salazarism espoused ideology founded on traditionalist legitimatory myths. Allied with the papacy, maintaining a neutral equidistance between both warring blocs, and being suspicious of the modern liberal order, Salazar repeated the “great truths” of European traditionalism. The Portuguese regime put into practice ”occidentalisme intégriste,” i.e. it entertained the myth of the redemptive, prophetic, and providential role of Portugal as a moral autority within Christian West.