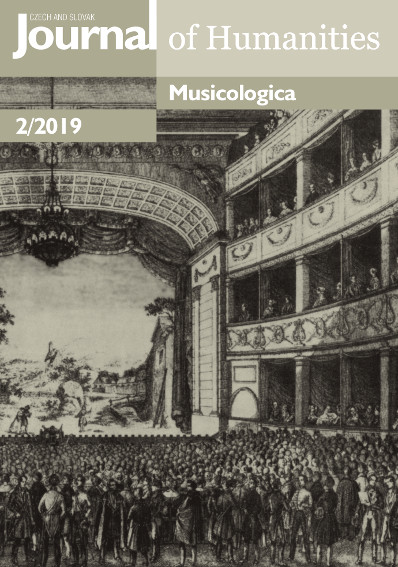 Nikoleta Bartošová
Na Szkle Malowane: An Analysis of the Historical Origin of This Musical Phenomenon

Abstract
The study examines a musical work Na szkle malowane [Painted on Glass], composed by Polish composer Katarzyna Gärtner in 1970s. The musical has been staged in different countries, but the most signifi cant legacy it has left in its domestic country Poland, Czech and Slovak Republic, where it has achieved an exceptional popularity. The aim of the following text is to evaluate the historical reception of the piece in those places and give an in-depth examination of the evolution of musical Na szkle malowane. Each ideas in text are based on contextualisation of events and phenomena that infl uenced a transformation of the piece in period of time of almost a half century.

Abstract
The period when Hans Richter was active as conductor at the Budapest National Theatre (1871–1875) was the heyday of political satirical magazines in Hungary. One of them, Borsszem Jankó, edited by Adolf Ágai, regularly published fake news and caricatures concerning the reception of Richard Wagner, whose music was more intensively cultivated in Buda pest under Richter’s conductorship than earlier. In my study I attempt to con textualize and interpret the articles published in Borsszem Jankó about Wagner and Wagnerians in order to demonstrate some characteristics of the composer’s Hungarian reception. I argue that the partly ideological opposition between Richter and Hungarian Wagnerians might have played a signifi cant role in Richter’s departure from Budapest.

Jiří Kopecký, Lenka Křupková
The Position of Italian Opera Repertoire in Austrian Province Theatres: The Case of the Olomouc Theatre (1830–1920)

Abstract
Throughout the nineteenth century, operas by Italian composers were part of the basic repertoire of all European and non-European theatre ensembles, which also included opera singers. The example of the Olomouc theatre demonstrates how the relationship to Italian opera was changing in the Austrian, and later Austro-Hungarian, monarchy. The Central European space long sought to create a national musical style. Before, however, the German and Czech authors, on the other side, were able to develop a repertoire which could fi ll up a large part of the performance days, it was specifi cally Italian opera which was used in order to master the opera form within the space delimited by a dense network of Habsburg theaters. The process thereby involved initial admiration followed by eventual complete rejection of Italian operas.

Abstract
The article is focused on Miloš Wasserbauer and František Tröster’s two productions of Dmitri Shostakovich’s opera Katerina Izmailova in State Theatre in Brno and Teatro alla Scala in 1964. The author deals with the interpretation of the opera, the direction-scenography concept, and the reception and historical context of the productions. Theatre di rector Wasserbauer and scenographer Tröster represented an operatic staging practice that substantially relied on progressive tendencies in direction and scenography in former Czechoslovakia in the 1960s. The author analyses the direction-scenography concept of the productions which represent the shift in theatrical imagination of operatic staging practice of the era.

Abstract
The theatrical space has always represented a space full of thoughts, stories and ideas communicated to the audience. Th e relationship between the artists and the audience was conditioned not only by the theatrical content but also by the theatrical forms and the theatre building itself. Two theatre buildings, both called the Municipal Th eatre, played a major role in the history of Pressburg. Th e fi rst one was erected in 1776 and the second in 1886. Th is study examines the main determinants involved in operating a theatre in Pressburg from the second half of the eighteenth century to the end of the nineteenth century, analyses the infl uence of the urban elite on the development of artistic life, and looks at the specifi cities that characterized the staging of European musical-dramatic repertoire in the Municipal Th eatre. Th e fi ndings also add information to the knowledge we have about the work of the painters of scenic designs active in Pressburg in the nineteenth century.

Abstract
The paper is focused on the fi rst Serbian rap-opera Zemlja sreće (“Land of Happiness,” 2007) by Dušanka Stojanović (libretto) and Vladimir Pejković (composer). The work provides a sharp critique expressed via self-irony and satire in the wider socio-political, economic and cultural context of the transitional period in the 1990s. The narrative of a love story of an “ideal couple” of a criminal and a woman of easy virtue becoming the presidential couple, envisioned as a counterpoint of rapping and opera singing, depicts a deeply cor rupt Serbian society, devastated by the disintegration of Yugoslavia, international sanctions, hyper-infl ation, isolation, media demonization, extensive emigration, and a lack of so cial and moral values.

Melita Milin
Cultural Transfer and the Writing of National Operas and Ballets in the Twentieth Century: The Case of Serbia

Abstract
The issue of the cultural (in this case musical) transfer of the genres of opera and ballet, as products of Western art music, to Serbia as a country liberated from Turkish rule in the early nineteenth century is discussed in the paper. It has been pointed out that the transfer process proceeded in four phases that usually overlapped: 1. the activities of foreign, mainly Czech musicians in Serbia and in Serbian institutions in the Habsburg Empire, starting from the 1830s; 2. guest performances of popular operas by foreign opera com panies since the late nineteenth century; 3. staging of foreign operas by domestic opera ensembles as an important step forward; 4. staging of the fi rst operas composed by do mes tic composers in the Belgrade and Novi Sad National Theatres at the beginning of the twen tieth century.

Abstract
Who were the protagonists of the operatic organisation during the late Habsburg Empire? Where did they come from? What strategies were applied to manage a season in the theatres of the Eastern Adriatic coast? This study reconstructs the steps necessary for the preparation and administration of an opera season from the stage of the impresario’s proposal to the directions of the theatres until the arrival of the companies, mainly Italian, in the analysed territory.