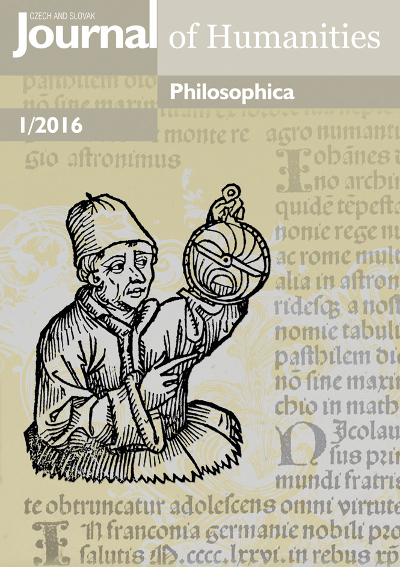 Abstract
Although Plato’s παιδεία, as developed in the Republic, shows the way to the contemplation of the Good, a problem remains which has to be examined: how does Plato explain the root of moral evil and why do we prefer to live in a world of appearances rather than pursue a just and noble life. The main question is if evil is due to a lack of knowledge (in this case, he would be a moral intellectualist), or if it is grounded on a bad psychological constitution (and, in this case, there would be a need to admit an internal evil in human nature). In this article I attempt to analyse a number of texts from the Republic and other dialogues in order to reach a possible answer and argue against certain intellectualistic views of Plato’s moral psychology.

Elisabeth Blum
Tolle – Lege: St. Augustine and the Oracle of Hermes of the Marketplace

Abstract
Starting from the episode of Augustine’s conversion to chastity as described in his Confessions, we here try to show how the planned, the incidental, and the succeeding interpretative reading combine in the structure of a multiple oracle, proving God not only the creator of order, but also the lord over coincidence and the author of history. The event in the Milan garden offers us a more complex and dialectical understanding of the relation between divine providence and human freedom in Augustine than the deterministic predestination formulated during the Pelagian controversies. Reading a text becomes the model for understanding the world and acting out God’s eternal plan under the conditions of temporality.

András Kraft
A Nominalist Deliverance from Error: On al-Ghazālī’s Concept of Modality

Abstract
In his The Deliverance from Error al-Ghazālī describes error as a sickness. Adhering to this metaphor, al-Ghazālī prescribes certain intellectual strategies for regaining one’s health. This paper reconstructs the proposed remedy for the philosophy of his day, that is, Avicennism, which al-Ghazālī attacks on specific key issues in his The Incoherence of the Philosophers. The paper focuses in particular on one refutation from the Incoherence’s first discussion, which deals with the issue of the pre-eternity of the world. In it al-Ghazālī advances a nominalist interpretation of modality, which allows him to reject the conclusiveness of particular Avicennan proofs. Moreover, al-Ghazālī employs this nominalist approach when dealing with the issue of causality. Al-Ghazālī realized that there is no definite criterion to choose between the two viable options of occasionalism and secondary causality; both theories are equally possible. The fact that he defines possibility in a nominalist, that is, non-temporal framework, allows him to suspend his judgment and circumvent the pressing question: which theory is true now? In essence, by reading the Deliverance and the Incoherence synoptically and by building upon the scholarship of F. Griffel it becomes clear that al-Ghazālī’s modal nominalism proposes an “intellectual surgery” that delivers from sickening error in the domain of speculative philosophy.

Abstract
The University of Vienna was founded in 1365 and of course there was also a philosophical or artistic faculty. The question raised in this paper is what was the fate of “philosophy” at that faculty. Under the influence of the nominalistic school of Paris the interpretation of Aristotelian texts was the main work – with a strong emphasis on the Physics. The faculty experiences an enormous upswing in the middle of the fifteenth century with two different “wings”: the mathematical sciences (algebra, astronomy, geography) and the humanistic disciplines rhetoric, poetics (inspired from Italy) which were cultivated on a high level by young scholars and for some time under the eyes of the Greek Cardinal Bessarion (who was present in Vienna in 1460-1461). Several decades later, around the turn of the century, this constellation received a new appearance with the extremely energetic humanist Konrad Celtis (1459-1508): a great organiser of academic life and a poet with rather prosaic topics: the use of classical texts for the education of the youth, social and cultural development in German and Central European towns. If he made a philosophy it was a pragmatic or performative one. His striving was more “artistic” than “philosophical”. He promoted the development of intellectual life in Vienna in this manner, philosophy having had there a rather weak position up until the nineteenth century.

Paul Richard Blum
Philosophizing with Past Thinkers: The Historical Dimension of Philosophical Problems

Abstract
Philosophy appears to deal with propositions that stand alone; this paper suggests that every philosophical tenet has a history, which is necessary to know in order to understand the idea. This is evident in doctrines that are unusual. As Robin G. Collingwood suggested, if something seems absurd, it is the answer to a question that is not yet understood. This question may be enveloped in a story. Consequently, doing philosophy can mean telling stories that create a framework in which thinking takes place. For all thinking takes place in a framework that is not itself thematic in the thought, as Michael Polanyi said. Again, whatever is external to philosophical ideas is what can be captured in stories. So the question remains: how to detect, in a philosophical problem, its history? As this paper shows, most philosophers tell stories about how their ideas originated; many of them deliberately establish the framework with hints at the history of their ideas. Investigating the history of philosophical ideas, therefore, amounts to seriously philosophizing.

Petr Vodešil
Liberty in the Work of Edmund Burke

Abstract
The objective of the article is to explain and substantiate why Burke’s concept of liberty is not in contradiction with the philosophical background of a free society even though, according to Berlin’s conceptual division, it belongs to the positive notion of liberty, which, however, is the basis of totalitarianism. Burke’s concept of liberty is interpreted as the consequence of his antirationalist position and of his view of the relationship between an individual and society. The study formulates two arguments that seek to explain why Burke’s concept of liberty does not contradict the theoretical background of a free society. The first argument points out Burke’s understanding of order, which is principally different from the rational order of totalitarianism, admitting a certain plurality of values and goals albeit accentuating tradition and continuity. The second argument refers to Burke’s paternalism, which is principally different from paternalism bordering on authoritarianism or even totalitarianism.

Abstract
In Ancient Greece, when philosophy began, it included all theoretical knowledge. Later, however, at the time of Aristotle, specialized sciences began to emerge and the scope of philosophy grew smaller and smaller. The question is what to do when philosophy has lost its ability to deal with any relevant topic. The paper discusses three possible views of the relation between philosophy and science: anti-scientism, conceptual analysis and naturalism. All these approaches have various disadvantages. For anti-scientism it is mainly the inability to explain the unprecedented success of modern science. Proponents of conceptual analysis are confronted with Quine’s attack on analytic statements and its consequences for a priori truths. Finally, naturalistic philosophers might be threatened by the hegemony of science and its universal application of the hypothetico-deductive method. The worst scenario for naturalistic philosophers is not as bad as some fear. Philosophers can solve their traditional problems using a knowledge of well-established special sciences, even though they might play the role of high end science journalists.

Dominika Jacyk
The Identity of Philosophy of Psychology. Certain Remarks on the Value of Philosophical Considerations for Psychological Deliberations.

Abstract
The identity of philosophy of psychology is undoubtedly rooted in the self-contained identities of both psychology and philosophy. In the present paper I analyse the theoretical reasons for the split of these two sciences in order to answer the question as to which philosophical path could be important for psychological research. The psychology of the nineteenth century is, in fact, philosophy which employs different meanings; it sketches theories of human subjectivity on an empirical basis and aims at fulfilling the conditions of a natural science. Philosophical psychology thus forms its own identity struggles with two types of demands: German idealism, on the one hand, which adamantly defends the logical coherence of deduction and psychological criticism, on the other hand, thanks to which questions of validity appear asked in connection with its occurrence.

Vladimír Vodička
Darwin’s Genuine Heir: An Appraisal of Alex Rosenberg’s Contribution to the Philosophy of Biology

Abstract
This paper is an appraisal of Alex Rosenberg’s take on the ongoing debates about philosophical reflections on evolutionary theory and biology based on his monographs and articles. From Sociobiology and the Preemption of Social Science, The Structure of Biological Science and Instrumental Biology, or the Disunity of Science over to Darwinian Reductionismand The Atheist’s Guide to Reality: Enjoying Life without Illusions. With a focus on the development of his thoughts, merits to the debates in philosophy of biology and the main ideas of the aforementioned field of philosophical inquiry, the proposed paper tries to concentrate on Rosenberg’s major and influential thoughts. This is the case of naturalism, reductionism and the relation between philosophy and biological science. One of the main characteristics of Rosenberg’s works on various topics in philosophy of biology is his compact program asserting scientific approach to reality disenchanting false beliefs. That is done by stressing thoroughly naturalistic approach with biology being no exception.

Petra Vašková
The Philosophy of Deception

Abstract
In my essay I will argue that lying and deception have often been treated in isolation, only from the point of view of their moral and ethical dimension. Lying, however, is part of the life of society, of the community, and it should be judged as such. I will analyse the concepts of lying, deception, spins and half-truths, as defined by Thomas L. Carson. Metaphors will be studied from the point of view of their truth-value. Carson’s approach will be compared to that of Friedrich Nietzsche, and further, the moral dimension of lying will also be included in my work.