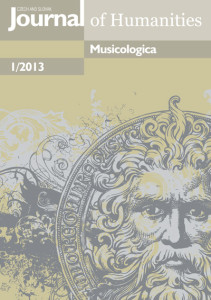 Abstract
Prague art critics identified an important trend of modern (music) drama around 1900 and evaluated new works by Czech authors accordingly. Incipient modernity, described at the time as symbolism and postwagnerism, sensitively responded to the schematic and primitive cruelty of verismo opera, creating stable structures which were as brutal as they were imaginative. The reviews often overlooked defects in modern Czech opera by composers such as Fibich and Ostrčil while underestimating compositions which were not considered part of the modern trend, such as those by Janáček.

Abstract
The following article provides a musical analysis of Serenade for Orchestra, written by Iša Krejčí between 1947 and 1950. Iša Krejčí (1904–1968) played an important role in Czech music culture and his work is closely connected with Olomouc. In light of the fact that Iša Krejčí is often described as a Neoclassical composer, the article also includes a brief study of the most important principles of his musical style.

Abstract
The present study deals with a hermeneutic reconstruction of the issue of partium toni discourse in Marchetto da Padova’s treatise Lucidarium in arte musicae planae. Contemporary propositions of the issue, according to Marchetto divided the whole tone into five equal parts called dieses, are postulated in the first part. By means of dieses he deduced three types of semitones, which are currently interpreted as two-fifths, three-fifths and four-fifths of a whole tone. This provides a number of interpretative issues which are described in more detail in the second part of the study.

Abstract
Only a small number of instruments from around the year 1600 have survived in Bohemia. Most of them are in two main collections: the Czech Museum of Music Collection, and the Lobkowicz Collection. The most important of all is a set of Renaissance wind instruments which originally belonged to the most powerful Bohemian noble family, the Rožmberks (the Squires of the Rose), who owned large estates in South Bohemia. Their music instrument collection consisted of almost one hundred wind instruments, almost forty string instruments, and seven keyboard instruments around 1600. The number of instruments which the Rožmberks possessed was smaller than at royal residences (such as the court of Henry VIII), but it was nevertheless impressive. At present, the surviving Rožmberk instruments (all together eleven wind instruments, a great-bass viola da gamba and a regal) are considered a rarity of world importance. Up until the late 1980s, the Czech Museum of Music possessed a Renaissance ivory flute, donated in 1869 by Václav František Červený, the most famous Bohemian maker of brass instruments. It is almost without a doubt currently in the Berlin Musikinstrumenten-Museum – its travels and the origin of the two piece flute which the Museum owns at present, are still the subject of research. There could also be more information to be discovered concerning the instruments kept in Bohemian and Moravian stately homes, as well as concerning musical motifs in pictures and plaster wall decorations. Research on murals, initiated by the Czech Academy of Sciences suggests that discoveries in the field of Renaissance instruments may still come to light.

Abstract
Studying performance with semiotics entails becoming involved in an extremely qualitative and processual field. It can be approached as a particular skill or competence preceding any performative act, or making use of certain theories, such as the Parisian school methodology. Emotions have their impact, however. Marcel Proust claimed that a performer, a musician, steps into another body when he/she begins to play; such a corporeality is intentional. The result of a performance is unpredictable and additionally belongs to the level of the ‘Schein’, appearance, as Etienne Souriau has put it. Existential semiotics can also be applied to performance where four modes of ‘being’ can be distinguished: body, identity, social practice or role and values. Each performer has his/her own profile in which these modes are emphasised and foregrounded in various ways. Such a theory of performance is of a general nature and concerns film actors, musicians and dancers. Even performance itself can be studied making use of these categories.

Jaroslav Volek
Melodic Archetypes in the Compositions of Josef Suk

Abstract
The following article was originally published in a collection of fourteen essays by Jaroslav Volek (1923–1989), Struktura a osobnosti hudby (Praha: Panton, 1988). Jaroslav Volek ranks as one of the most insightful of all international music theorists. His demonstration of the interconnected nature of a deep structure with semiotics, musical intelligence, emotional impulse, and the limitless power of creative inspiration reveals a remarkably fundamental aspect of Czech music which is difficult to communicate otherwise. The fact that Volek was not allowed to teach under the Communist regime is in a way, our good fortune. Otherwise, he might not have had the time to document a lifetime of sensitive, profound musical analysis in his publications. Volek’s work has had a significant impact on the direction of contemporary Czech musicology, aesthetics and semiotics.