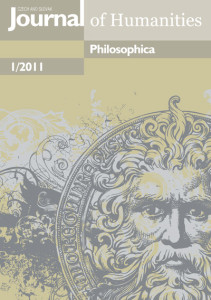 Abstract
The corporeal form (forma corporeitatis) in the thinking at the peak of the Middle Ages has its origin mainly in the eff ort to categorically define prime matter in Avicenna’s work. This effort proved to be problematic. Averroes also noticed it and he attacked the substantial concept of a corporeal form in a way that later on was very close to Thomas Aquinas in his criticism of Ibn Gabirol. Although Thomas Aquinas refused to understand prime matter as blessed with corporeal form, and thus also the pluralism of substantial form, he kept the concept of the corporeal form itself. He however transformed it in a fundamental way. The corporeal form ceased to be substantial form that would establish any ontological level in the order of being. In this sense, the forms of elements stand on the lowest level of Thomas Aquinas’ understanding. It however became the essential part of all material forms including the soul of man. This step enabled Thomas Aquinas to include prime matter into the order of creation and thus consider its cognition through form which follows the possibility of defining three dimensions. On the anthropologic level, Aquinas puts the concept of the corporeal form against the eclectic Aristotelianism of the fi rst part of the 13th century which was in its essence anthropological dualism.

Miroslav Hanke
“…ergo Socrates est species.” Marginalia to the history of one paralogism

Abstract
The paper deals with the analysis of the paralogism “Homo est species, Socrates est homo; ergo Socrates est species” as performed by authors selected from within the period between the twelfth and the fourteenth century. The research focuses on two theoretical contexts of medieval logic, namely grammar and semantics of terms in verbal context (i. e., the so-called terminist semantics). The analysis demonstrates how the understanding of this paralogism alters according to the change in the approach to specifi c grammatical notions and according to the change and the systematical development of the theory of meaning (especially with respect to the so-called theory of suppositio).

Abstract
The paper deals with the teachings of the Czech thinker Petr Chelčický. The research focuses on his theologizing philosophy, which was rather neglected in the previous philosophical and historical works dealing with his thought. The author focuses on basic aspects of Chelčický’s teachings as his rejection of all forms of violence and the idea of Christocentrim. The main interest of the author is the analysis of the reception, de-viation or re-reception of Chelčický’s philosophical and theological thought from the first generation of the Unity of the Brethren to John Amos Comenius. According to the author, Comenius’ work can be interpreted as a completion of the triad reception (characteristic of the Czech context up to the mid-nineties of the 15th century) – de-viation (delimitated in fact by the 16th century and the fi rst two decades of the following century) – analogy (being represented by the last bishop of the Unity of the Brethren).

Abstract
The paper analyzes two contemporary arguments for the view that the universe is so vast that human actions and human life generally have no meaning and signifiance. The first case, rather essayistic and authored by Thomas Nagel, is estimated as logically nontransparent. The second one, more rigorous and authored by Quentin Smith, expands with the help of the assumption that the universe is spatiotemporally infi nite on insights similar to those of Nagel, but its inference to the conclusion remains obscure, too. Hence a detailed reconstruction of the latter argument is set forth. We draw attention to the designed premise that the amount of value (positive or negative) of anything is not greater than aleph-null, noticing the dubiousness of this premise and its clash with Smith’s metaphysics of points.

Javier Aguirre
Plato’s Sophist and the Aristotelian being

Abstract
In the chapter M 4 of Metaphysics, Aristotle criticizes the dialectics practiced by Socrates. Aristotle attributes to Socrates the lack of “dialectical power”. In the same way, in N 2, Aristotle criticizes the dialectics practiced by “the dialecticians” imputing the archaic way in which the problem about being is posed. There are many signs that make us think that Aristotle refers to Plato and the Platonics with the term “dialecticians”, to whom he attributes the “dialectical power”. Therefore, Aristotle is aware of the merits and shortcomings of Platonic dialectics, more specifically of the dialectics practiced by Plato in the Sophist. In the development of his own conception of the being (to on), in the middle books of Metaphysics, Aristotle bears in mind the contents of this dialogue and makes the attempt to overcome the difficulties stated in the Eleatist, such as the defi ciencies of the Platonic way of understanding the being.

Abstract
This paper deals with Mirandola’s concept of the Christian Kabbalah. As I said in the introduction, Pico is mostly perceived as a leading representative of the Florence Academy or as a possible initiator of a newly emerging scientific paradigm (Thorndike, Yates) in the 17th century. Besides, there is another important point. I think that Pico should be considered as a creator of the Renaissance Christian mysticism, where he followed the apologetic-missionary concept of Raymundus Lullus and eschatological Trinitary visions of Joachim da Fiore. However, Pico enriched his concept with motifs coming from medieval Jewish mysticism, which he enriched with motifs coming from medieval Jewish mysticism. Unfortunately, Pico did not master Hebrew well and so he was too dependant on his translators. Still we cannot deny two facts. First, he was the first to transform the originally Jewish doctrine into Christian cabbala, which he also connected with Neoplatonic-Pythagorean and Aristotelian philosophy. Second, he influenced directly or indirectly Renaissance intellectuals in the 16th and 17th centuries, such as Gilliaume Postel, Francesco Zorzi, Athanasius Kircher, Kaspar Knittel, etc.

Erwin Schadel
Kepler as a Theorist of Music. His Geometrical Presentation of Basic Intervals Explained in the Perspective of Onto-Harmonical Integrality

Abstract
This article aims at a better understanding of what tonality is. It focuses on Kepler’s contribution to a deeper elucidation of this problem, especially his selection of musically sensual proportions by means of geometrical demonstrations, continuously controlled by monochord-experiments. In this way Kepler detected the so-called senarius (the series of proportions contained in the first six numbers); thereby he was able to eliminate the “weak” points in the exoteric scale-buildung of the ancient Pythagoreans. By substituting the Ditonus (64:81) through the natural third (64:80 = 4:5) he opened the the way to the polyphonic compositions of the Baroque era.

Gabriela Matulová
Cambridge Platonists and their reaction to Thomas Hobbes

Abstract
The aim of the article is to show the diff ering attitudes of the relatively unknown religious platonic philosophers in Cambridge, especially Ralph Cudworth and Henry More, and Thomas Hobbes who is regarded to be one of the most prominent philosophers of the 17th century. The topics in focus are the existence of the spiritual world, man and his freewill, and the character of morality. All these are connected to religion, political philosophy and study of society. Although Cambridge Platonists cannot be regarded primarily as political philosophers, their teachings show certain reactions to contemporary events. In the article the author shows that Cambridge philosophers objected strongly to Hobbes’ ethical relativism, against which they postulated the thesis that abstract entities or concepts, such as justice, do not only exist but furthermore their existence is more real than the existence of material things. They, however, do not think of the natural world as a sense illusion, but what gives the world its intelligibility and beauty, is the mind. The article gives a basic insight into the teachings of Cambridge Platonists as compared to Thomas Hobbes.

Abstract
It is well know that Spain has been the Catholic country par excellence. At least since the 16th century, Spain lost its shine and its philosophical size. Since that time, up to Franco’s time in the 20th century, political and religious power were very closely connected. A dogmatic scholasticism was the only possible “philosophy”. The Reformation which released a spiritual movement in Europa left Spain in its isolation untouched. The 19th century began in Spain with two opposite mind postures whose collision characterize its history till now. It was the century of the fight between traditionalist and liberal in Spain. The traditionalist tried to keep away modern philosophy from Spain. They saw Catholic theology threatened by modern philosophy and so incompatible with it. For example, Balmes (the most significant representative of scholasticism) criticized all of modern philosophy, from Descartes up to German Idealism, as “fully from mistakes”. He concentrates his criticism upon the philosophy of Kant because from this, as he writes, “pantheistic” system arise Fichtes and also the systems of Schelling and Hegel with inevitable consequence.

Ivan Moďoroši
Theosophy as the highest science for Vladimir Solovyov

Abstract
Vladimir Sergeyevich Solovyov belongs to the greatest thinkers of not only his period, but all of Russian philosophy as such. He analyzed his greatest topics against the central idea of “sobornost“ – togetherness and sophiology. Theosophy represents his attempt to synchronize primarily different aspects of human thinking. Rational, empirical and mystical (spiritual) parts have their expressions in philosophy, empirical science and theology. Only the synchronization of these three aspects will bring, according to Solovyov, an entire view of the truth which is only an abstract term when it investigates without one of the elements. And that cannot entirely express the nature of the truth. These opinions are all the more important, as he presented them right in the time when the disaffection of science, philosophy and religion was crucial. Solovyov’s opinions must be permanently confronted with his whole system where there mystique takes its specific place. This is the only way to understand his system and it may be an inspiration for theology, philosophy and also empirical science.