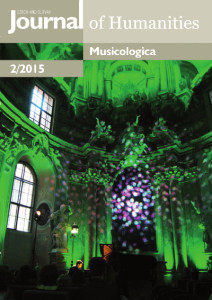 Abstract
Władysław Żeleński wrote concerning his Five Songs from the Manuscript of Dvůr Králové that they included a certain “Slavic element”. Following therein, the author of this paper explores the relationship between the above-mentioned musical works and the Slavic idea. He explores Żeleński’s songs in light of the Slavophile discussion about the Manuscript and analyses Żeleński’s songs within the context of earlier musical settings of the celebrated hoax.

Abstract
This article is devoted to the history of the presence of Leoš Janáček’s output (and him personally) in Polish musical life. Certain newly discovered facts have helped to explain anew Janáček’s interest in Poland and its culture. The presence of Janáček’s compositions in the Polish opera and concert repertoire was interpreted as part of the broadly sketched social-political context in order to reveal its connections with the current state of Polish-Czech affairs (including the Polish reception of the Slavonic idea). The second aspect of the author’s considerations was the influence of the artistic ideas prevailing in western Europe (particularly in Vienna and Berlin) on the Polish style of understanding Janáček’s music.

Abstract
This essay concerns the opera La catena d’Adone written by Ottavio Tronsarelli and set to music by Domenico Mazzocchi (1626, Rome). The analysis is focused on the librettist, his life and his work; then on the performance and the printing of the text and score. The main interest is furthermore focused on the peculiar historical and cultural situation of the opera in the coeval Roman milieu, between the death of Marino and the ecclesiastical condemnation of his poem Adone. A number of pages are also dedicated to an in-depth analysis of a comparison between the Adone and the libretto by Tronsarelli, underlining the differences and stressing the purposes of the artistic operation by Tronsarelli and Mazzocchi.

Greg Hurworth
Elgar and Mahler: Ships that Passed in the Night

Abstract
In this article, the author attempts to highlight the similarities that exist between the music of Sir Edward Elgar and Gustav Mahler. Both came from humble backgrounds, and rose to prominence in higher social spheres within their respective countries. Their characters and personalities meant that their music was often misunderstood, which produced endless frustrations and struggles in their lives. Moods swinging between utter joy and profoundest sadness pervade their music to the extent that their music shares many characteristic traits, and certainly more than with any of their close contemporaries (Puccini, Debussy, Sibelius, Nielsen). This article therefore aims at showing common meanings behind their music, and how they portrayed these meanings in musical ideas.

Abstract
The paper examines the phenomenon of how Leoš Janáček achieved modern sound in his opera Jenůfa while maintaining the melodic and harmonic course within the diatonic and tertian structure of chords. The analysis begins with the melody originating from the Czech language and spoken words. Through insight into the development of predominantly short motifs into a wider whole, one can arrive at a very interesting conclusion which is at the same time the primary focus of the research; the variability of scale structure of the melody is in fact the fundamental principle in the creation of the overall musical flow of the piece.

Thomas Sovík
An American Theorist Reflects on a Quest of Quibbles (or) Don’t Follow Us, You Don’t Want to Go There

Abstract
The author discusses the history and purpose of music theory, a field of study that, as he says, has done much to turn students away from music since its birth as an independent academic discipline in the United States in 1977. In this regard, the consequences of the separation of music theory and musicology are analysed. The author also criticises the separation of music into distinct categories within the school curriculum. He argues that it is counterproductive if we begin by explaining to our students how things are so much different before they understand how things are essentially the same and how they fit into the time continuum of music history. Here he illustrates the fundamental common features between classical and popular music.

Abstract
In the present article the last third of Karel Burian’s career is discussed, not only because it is perhaps a less known period of Burian’s biography, but also because it is closely connected with Hungarian culture. In these years he appeared in Budapest as a regular guest of the Royal Hungarian Opera mainly as a Wagner singer but also in French, Italian and Hungarian operas, and celebrated his thirty-year jubilee as an opera singer also in Budapest. After a chronological overview, certain special aspects of Burian’s Hungarian activity are examined, e. g. his Hungarian naturalization (the so called ‘Hungarian divorce’) and the political context of his appearances at the end of the First World War.

Eva Vičarová
What did Olomouc Concert-goers Listen to during the First Czechoslovak Republic? Local musical Societies in the International Context

Abstract
The present study is concerned with the two most important musical societies in Olomouc: the German Musikverein and the Czech Žerotín. It provides a survey of the repertoire produced by these societies in Olomouc in the period from 1918 to 1938. The findings are presented against the cultural backdrop of the time and the historical development of music. The repertoires and programming of the musical societies in question are compared to those of selected societies in Vienna, Graz, Basel and London. An evaluation of the quantitative data is given.