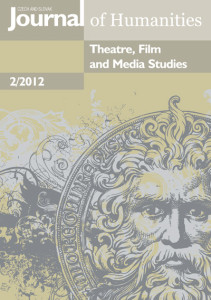 Abstract
There has been a municipal theatre in Brno since 1733 and theatrical enlightened reforms were apparent here relatively soon. The nearby city of Vienna, however, played an important part in this. Starting in the mid 1750s, itinerant players performing in German, who would come from Vienna to Brno, would adjust their repertoire to the new aesthetic demands by including regular dramas. In implementing the new repertoire, a major role was played by Italian impresarios who, apart from musical genres, also offered plays by Carlo Goldoni to the audience in Brno. As of the beginning of the 1770s, the Enlightenment repertoire was continuously performed for over the next twenty years in the German Municipal Theatre in Brno.

Abstract
After the collapse of the Austro-Hungarian Empire and after the proclamation of Czechoslovak independence on 28th October 1918, national questions were also addressed in the new political order. Městské divadlo v Opavě (The Town Theatre in Opava) was until then exclusively German and performances in Czech were only played there in a few attempts in the 1930s and 1940s. Over the years 1919–1938 the German Theatre in Opava was forced to lend part of their performance days to performances in Czech and share the building with the Czech minority. Czechs took advantage of the situation and ensured their regular hosting via an agreement with two Czech professional theatres in Ostrava and Olomouc. It turned out that there were three professional troupes in Opava. German theatre followed an earlier tradition, while for the Czech branch this was a new position.

Abstract
This article focuses on the distinguished theatre director Oldřich Stibor (1901–1943) whose work in Olomouc in the 1930s represents a unique period in the history of Czech theatre. The first part of the study is devoted to an evaluation of the importance of Stibor for Czech inter-war theatre. The second part analyses his open-air performances and focuses on
his efforts to establish a festival of religious plays on the Holy Hill near Olomouc. He finally brought his idea to fruition in the years 1936 and 1937 and thousands of people had the opportunity to attend his production of Hofmannsthal’s adaptation of Jedermann (Everyman), České pašije (Czech Passion Plays) by Jan Port and Bohuš Stejskal and the Guardian Angel Play by Max Mell. This tradition was unfortunately violently interrupted by political developments in Central Europe in 1938.

Abstract
This study focuses on the inspirational aspects of Polish theatre and their application to the Czech theatre context of the second half of the 20th century. With specific examples from studio and authorial theatres in Moravia and Silesia, it analyses the influence of the anthropological concepts of Jerzy Grotowski and Tadeusz Kantor on the poetics and expressional techniques used in Divadlo Husa na provázku (Theatre Goose on the Rope) and HaDivadlo (Ha Theatre). In the second part of the text, I examine closely the aspects of Polish directorial concepts which drew inspiration from the authorial concepts of Grotowski’s and Kantor’s theatre, as well as from the tradition of Polish drama and the application of these aspects to contemporary Czech theatre via Polish directors who worked in Moravia and Silesia after 1989.

Abstract
Broadcast journalism, mainly documentary, radio sequences and features, was evolving differently in both parts of former Czechoslovakia. Český rozhlas (Czech Radio), had its facilities in the Study Department, first and foremost in the person of the theorist Josef Branžovský, whose knowledge of modern trends was comparable with his European colleagues. When he was forced to leave after 1969 and the Study Department was closed, it meant not only a loss of continuity within the studio, but also a general decline in documentary broadcast production. The period of disintegration continued throughout the entire normalization era up to the middle of the 1990s. This text includes an overview of J. Branžovský’s professional life as well as the story of thirty years of Czech and Slovak radio features and the way in which it was reflected in the press.

75–88
Vladimír Suchánek
The Hour between the Dog and Orion. Horizontality and verticality in the thematic composition of man as an image of transcendence in František Vláčil’s films: Pověst o stříbrné jedli (The Legend of the Silver Fir) and Sirius.

Abstract
This study analyses the spiritual connections of two films by František Vláčil Pověst o stříbrné jedli (The Legend of the Silver Fir) and Sirius which he made at Gottwaldov Film Studio in the period after 1969. The basic analytical approaches are the verticality and horizontality of the story’s internal composition, the necessity for transcendence among human beings and the movement towards the meaning of human actions as a direction towards eternity. Both levels mingle and complement one other within the analyses of the spiritual principles which function within the context of the protagonists’ behaviour or independent of it as an ethical-spiritual imperative, which exists on its own.

89–100
Luboš Ptáček
Idealogical Patterns in the Occupation Trilogy of Otakar Vávra Dny zrady (Days of Betrayal), Sokolovo, Osvobození Prahy (The Liberation of Prague) (1973–1975) on the Background of Czech Historical Films of the 1970s

Abstract
The aim of this text is to introduce those ideological patterns which were placed into the occupation trilogy by Vávra and draw attention to the similarity to the patterns used in the Hussite trilogy Jan Hus, Jan Žižka, Proti všem (Against All ) and in his highly acclaimed film Kladivo na čarodějnice (The Witch Hunt ).
In the occupation trilogy, Vávra foregrounds the role of KSČ (Communist Party of Czechoslovakia) in the critical moments of 1938 and during the anti-Nazi resistance movement. He accuses the politicians of the democratic parties of cowardice and of plotting against the Soviet Union. He criticises English and French compliance with the Munich Agreement. He presents Klement Gottwald in the context of a refashioned cult of personality. He points out the impossibility of a peaceful coexistence with the German minority.

105–106
Milan Hain
Review of Gustav Machatý. The Longing to Make a Film. The Person of the Director against the Background of the History of Cinematography.

107–108
Petr Bilík
Review of The Greengrocer and his TV: The Culture of Communism after the 1968 Prague Spring. The Dietl Era Under a Merciless Scrutiny