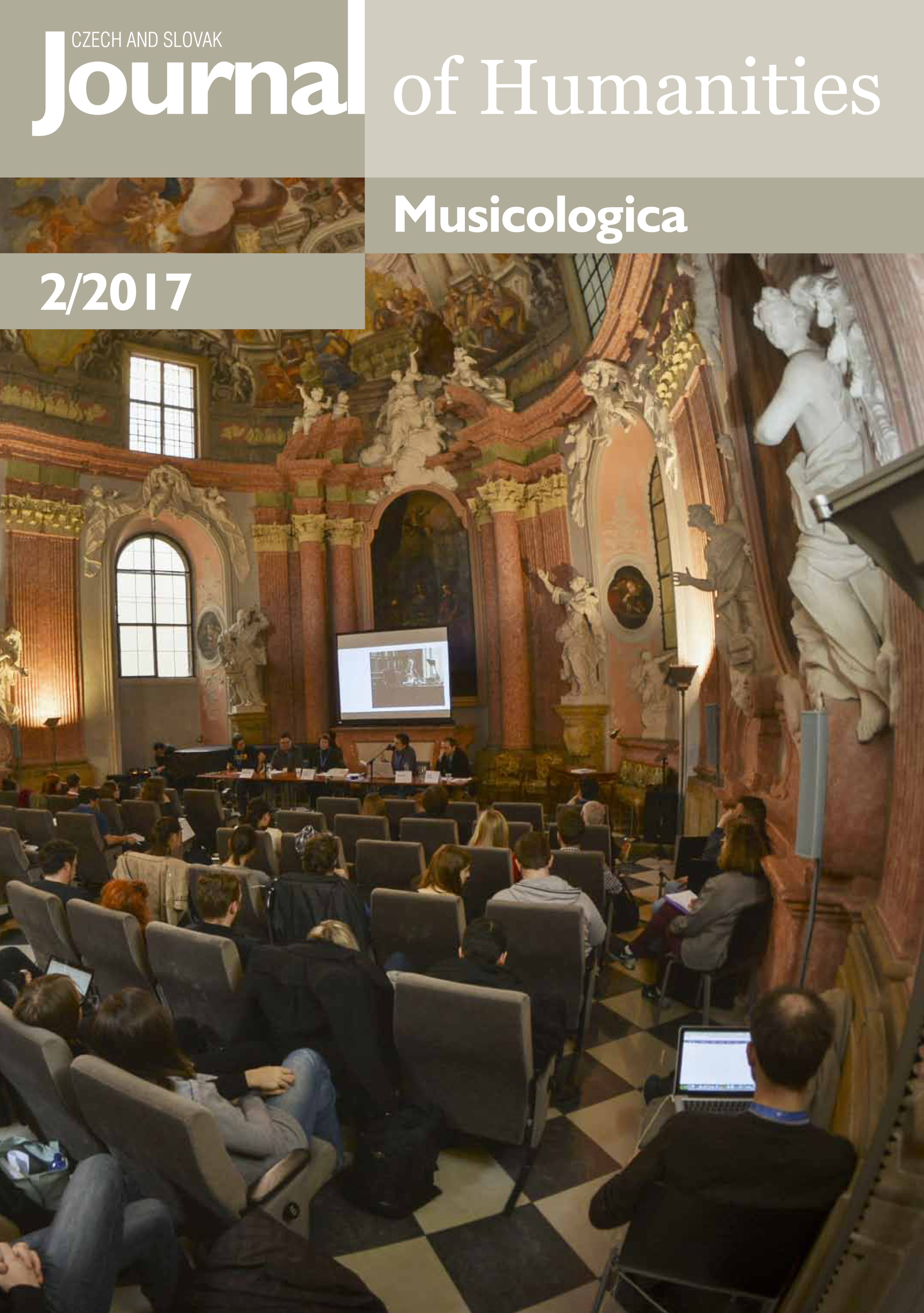 Abstract
Progressive rock of the 1970s represents a unique development in modern music of the twentieth century. It was a movement which introduced the atypical association of a highly sophisticated and complicated means of expression, primarily derived from the area of so-called serious art, with a wide popularity bordering almost on fashion. Bill Martin, the American Marxist philosopher and social theorist, aptly named this remarkable phenomenon progressive rock, based on the Anglo-American rock experimentalism of the second half of the 1960s. This became a global artistic trend over the following decade, using the paradoxical term “popular avant-garde.” The study presents the broader cultural context of the existence of the progressive rock genre. Theories on the given topic by Czech popular music scholars are also taken into account.

Magdalena Dziadek
Czechoslovakian Music in Poland in the Interwar Era

Abstract
The aim of the paper is to collect press sources concerning the dissemination of Czechoslovak music in Poland between 1920 and 1939 and describe their significance within the broader social-political context. The main elements of this context are: the Polish-Czechoslovak conflict of the year 1920, the period of normalization of Polish-Czechoslovak relations in the 1920s (with the culmination in 1928 when the tenth anniversary of the Czechoslovak Republic was celebrated in Poland) and the period of the 1930s, characterized by a significant increase in anti-Czechoslovak moods in Poland, ruled then by the government of Józef Piłsudski. In spite of the difficult political situation, there were a number of interesting initiatives which took place in interwar Poland, by both private people and official institutions, in order to promote Czechoslovak music in Polish society. These institutions included: the Warsaw Philharmonic, the Warsaw, Poznan and Lvov opera houses, Polish-Czechoslovak Societies active in several cities, choir associations, music magazines, the Polish Section of the International Society of Contemporary Music and, last but not least, the Czech diplomatic service in Poland.

Abstract
The ensemble of musical instruments played by skřipky “fiddle” music bands can be considered a closed development segment of our traditional folk culture. As a living element, it ceased to exist in the mid-twentieth century. Since that time, it has been part of local folklorism as performed by two folk ensembles. The speed with which the musical instruments stopped being used, as well as the fact that, over a very short period of three generations knowledge of the construction of these unique musical instruments disappeared, should serve as a warning. This loss can only be restored elaborately with hindsight, and it will be irreplaceable in many cases. In this particular case, one can profit from the fact that the knowledge of playing the described instruments has been passed down by survivors and audio-visual technologies, and that several historical pieces, maintained in a playable state, have survived. Only in this way, can one confront the newly made instruments and the original pieces visually and through acoustic measurements. The partial results of the first measurements presented above confirmed the validity of the approach, and their applicability to this tangible segment of musical culture. The results also provide impulses for future developments in documentation of musical instruments within interdisciplinary projects.

Abstract
It is well-known that Paul Simon took the melody for the first eight measures of his song “American Tune” from the chorale “Acknowledge Me, My Keeper” – more commonly, “O Sacred Head, Now Wounded” – from the St. Matthew Passion. It is also known that Bach used this melody elsewhere in his oeuvre: namely, in the Christmas Oratorio (though with a different harmonization). Somewhat less known is that Bach borrowed the tune from Hans Leo Hassler’s secular song Mein G’müth ist mir verwirret “My peace of mind is disturbed.” In this study, I trace the origins of “American Tune” from the Hassler song and textual correspondences between various incarnations of the song in order to explore intertextuality with other texts. Further, I argue that the Statue of Liberty, mentioned only briefly in the bridge, is the focal point of “American Tune,” and it is the locus of the protagonist’s misgivings about the contemporary political situation in the United States.

Abstract
Jews, whose culture had existed for thousands of years, finally gained a “national consciousness” at the beginning of the twentieth century. According to Leonid Sabaniejew (1929), this allowed them to speak to a wide audience in their own musical language, and furthermore, introduce Jewish music to the world of general European art. The musical works of these composers, who declared themselves representatives of the so-called “new Jewish school in music”, reached Prague during the interwar period. The group was established in Vienna, soon after the First World War, (as the Society for Promotion of Jewish Music, founded in 1928) and was primarily made up of Jewish artists who had emigrated from Russia. They aspired to create modern art in the form of “concert music”, which would exploit the achievements of classical music, but at the same time remain distinct and specifically Jewish in terms of its material. There is a direct analogy here to the activity of Fryderyk Chopin in Poland, Edvard Grieg in Norway, or Mikhail Glinka and Modest Musorgski in Russia. The main ideologists of the new Jewish school were the cellist Joachim Stutschevsky, and the pianist, pedagogue (working in Vienna, but born in Warsaw) Juliusz Wolfsohn. The article documents in detail the presence of the works of the above-mentioned artists, as well as other composers of the new Jewish school, e.g., Ernst Bloch, Jean Paul Ertel, on the stages of interwar Prague, and their participation in important music events of that time such as the ISCM World Music Days Festival in 1924. The author also reports on the activity of a group of young debuting Jewish composers, among whom Frank Pollak, Walter Süskind, Mieczysław Kolinski, Berthold Kobias and Hermann Weiss, are worthy of mention. Finally, the article underlines the important role of the Universal Edition publishing house in the process of promoting new Jewish music in the city on the Vltava. The sources on which the study is based are mainly periodicals published in Prague, in both the German and Czech language.

Abstract
This study explores Libby Larsen’s creative compositional reintroduction of a centuries-old theme, the Royal Theme, in which she draws from the Musical Offering in her Evening in the Palace of Reason (2007). Larsen does more in the composition than simply display her composing ideas on the Royal Theme. A number of familiar musical characteristics and ideas, that have certain elements of style in common from the musical past, are also used. The work goes beyond the usual musical style of Larsen and demonstrates the composer’s individual and unique synthesis of conservative and contemporary musical language. The study shall also examine how Larsen copes with the stylistic changes of the three periods, in particular the styles of J. S. Bach and Frederick the Great, and how she reinterprets these different musical styles in the music.

Marcello Tanca
A Different Popularity, a New Beginning: Mozart at the Freihaus (1791)

Abstract
Mozart’s Die Zauberflöte premiered at auf der Wieden, a Viennese theatre with a popular, vernacular repertory in the German language, which had one of its strong points in the Kasperliade, the popular farce with dialectal and fantastic traits. This repositioning by Mozart in Viennese theatrical geography is explained by one reason: after Joseph II’s death in February 1790, and still at war with the Ottoman Empire, Vienna could not afford to host the subscription concerts the artist had held in the previous years. Due to the absence of the young noble heirs and the wealthiest bourgeoisie, the composer needed a different kind of popularity.

Abstract
The contribution provided information about the kind of music listened to by today’s school youth 11–15 years of age, the way they obtain recordings, and the role of their family with regard to their musical preferences. The data presented are derived from a large-scale research project performed in June 2016 with a sample of 841 participants living in smaller as well as larger towns in four regions of the Czech Republic. The investigation followed up on similarly conducted surveys of musical preferences performed in the Czech Republic with adolescents and adults. The investigation included a listening survey. The preferences and the tolerance for music genres were also evaluated depending on the age and gender of the students, attendance of a primary art school and the influence of peers.