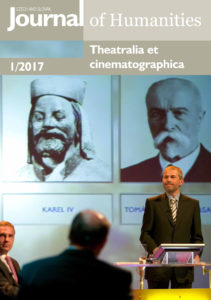 Abstract
The paper examines the imaging of the topical society-wide theme of death and palliative care in the Czech radio documentary. A quantitative content analysis lists documentaries which deal with the topic of death or dying. Individual documentaries are examined in terms of function, dramaturgy and with regard to the Czech Radio Code. The analytical part focuses on instruments provided by the radio to deal with the topic, narrative and journalistic practices which the authors choose when contacting the respondents and the overall composition of the documentary work touching this sensitive topic. The aim is to draw attention to the lack of reflection on highly topical issues and the extensive problem of displacement of dying and death both in the public media and beyond.

Abstract
The current study applies the classification of documentary film modes based on the theoretician Bill Nichols to radio documentaries and features with a special focus on a particular one of them, the performative mode. I combine the autoethnographic method with narrative analysis to demonstrate the performative approach in authorial radio documentaries. Using several examples from international auditory creation, I attempt to demonstrate how key terms from Nichols’ theory (emotional intensities, social subjectivity) can be applied and what roles the author of radio documentaries assumes. I pay extended attention to the ethical aspects of the autoethnographic method and the pitfalls associated with authorial stories, the self-concept of the author or the author’s family in the radio documentary. In conclusion, I apply the theoretical notions to my own documentary based on my ultimate life experience, a serious injury to my son.

Jan Motal
From Interactivity to Freakshow: Ethical Aspects of New Television Trends from the Perspective of Democratic Competence

Abstract
The paper outlines selected ethical aspects of interactivity as a principle. It applies content from Philippe Breton’s perspective of the theory of democratic competence in the transformation of technology and contemporary television broadcasting. In terms of the moral philosophy of media, the author views interactivity as a claim on acting and disturbing the space for inner human contemplation integrating one’s experience into identity (interiority). Interactivity in this concept may disrupt democratic competence. The author traces this problematic aspect of interactivity specifically in new television formats focusing namely on local production. The author attempts to demonstrate how, due to the reality TV show in particular and its accentuated narrative of success and conflict, interactivity is becoming the prevailing principle and in extreme cases turning into a freakshow. The paper describes the negative relationship between these phenomena and democratic competence.

Abstract
The article is primarily based on my phonetic research carried out in 20141 and partly on additional ongoing research which will be part of my PhD dissertation. The aim of this research is to find out and evaluate if TV news presenters adhere to the rules of the orthoepic norm, if their speech affects the objectivity and neutrality of the TV news, and if these speakers have the potential to establish language patterns for Czech society (similarly to language standards on the BBC). The analysis focuses on thirteen TV news presenters from three Czech TV channels (ČT 1 – public, TV Prima – private, and TV Nova – private). The entire analysis is based on previously published theories on public speech, rules of the Czech orthoepic norm, and description of speech impediments, as well as on related analyses published in 1999,2 20033 and 2011.4 The analysis focuses on both the segmental and suprasegmental levels. The results are compared with the analyses from the years 1999, 2003 and 2011, and, additionally, with a listening test (an additional comparative tool) assigned to the students from the Department of Czech Studies at the Faculty of Arts, Palacký University, Olomouc.

Abstract
The BBC television format 100 Greatest Britons (2002) was a pioneer on the global television market. The project is based on cultural translation and on shift s in form and content, enabling it to address the largest local target audience possible. It can consequently be considered a typical representative of so-called glocalization. A text by a TV theoretician and one of the managers of the Czech version of the format (The Greatest Czech – Největší Čech, 2005) provides an insider’s view. It follows the steps Czech TV had to take when adapting the format to fulfil the provisions of the licence agreement and address its concrete audience in its own, specific way.

Abstract
Foreign fictional TV production aimed at teenagers, i.e. teen TV, is currently strongly influenced by the desire of television stations to capture the attention of the lucrative audience of Millennials. One of the characteristics of this production is an emphasis on the diversity of characters that populate the fictional world of the TV series. Th is article deals with a specific type of characters; LGBT+ teenagers who have shifted, in terms of action and importance in the narrative, from a marginalised group to the centre of attention of the audience, both in terms of the narrative function and the transformation of character personalities from pure stereotypes and TV tropes to complex protagonists. The author deals with the interconnection of marketing focus on Millennials and the representation of such characters and argues that one of the main reasons why these characters are currently so narratively focused on is, more than the success of human rights activists, an eff ort on the part of marketing departments of TV stations to reach a specific demographic.

Audionarratology: Interfaces of Sound and Narrative
Review by Zuzana Řezníčková

Cable Guys: Television and Masculinities in the 21st Century
Review by Jana Jedličková

Television Audiences Across the World: Deconstructing the Ratings Machine
Review by Jana Jedličková

The CIA in Hollywood: How the Agency Shapes Film and Television (Revised and Updated Edition)
Review by Milan Hain